I’m trying to screen record my production sessions in Ableton Live 9 using Quicktime's screen record mode. The video recording works flawlessly, but the audio from my Komplete 6 interface is not being recorded.

It seems that many Mac users failed to record screen with audio by using QuickTime Player. Actually this built-in recorder on Mac can only record the audio through external speakers and built-in microphone. It’s not able to record the system sound.

Here in this article we will share how to record screen and audio at the same with QuickTime Player on Mac. If you want to record iPhone/iPad screen with QuickTime, it’s also possible. Keep reading to get the detailed guide.

It’s easy and free to record video on Mac with QuickTime Player, but if you want to record the internal audio on Mac as well, to achieve this you need a way to route the audio playing to QuickTime and a free program called SoundFlower can do you a favor. It’s an extension to Mac devices that allows audio information to pass into other applications. So please follow the steps below to record Mac screen with internal audio by using QuickTime Player.

Step 1. Download SoundFlower from https://soundflower.en.softonic.com/mac and set it up.

Step 2. After SoundFlower is installed successfully, restart your Mac computer to refresh all controls. Then go to system preferences and visit the sound tab. Click the sound output option and select SoundFlower (2ch) as your active output for the later QuickTime screen recording.

Step 3. Use Finder to find QuickTime Player and launch it to start screen recording on your Mac. 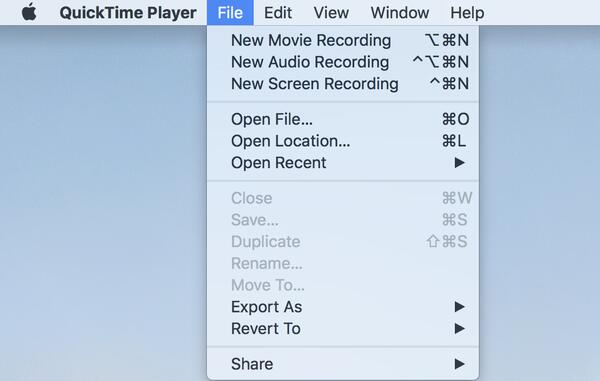 Step 5. There is a drop-down button besides the red recording button, click it to select Soundflower option in order to record the system audio. 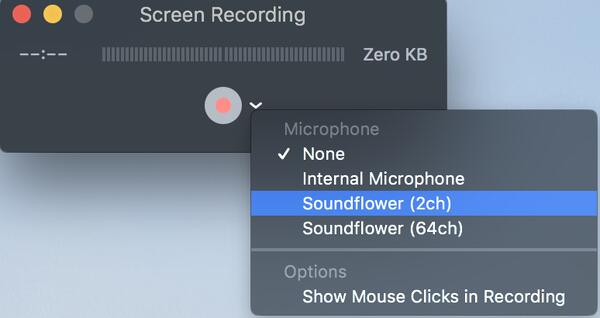 Step 6. Now you can start recording your Mac screen by simply hitting the red circle icon on the screen. You are allowed to record the full screen or drag your mouse to customize the area you want to record. Once the recording process is complete, you can click the stop button on the top of the menu to stop recording. Before you save the recorded video and give it a name, you are able to preview it to confirm whether it meets your demand.

Step 7. After you finish QuickTime screen recording on Mac, you need to disconnect Soundflower from audio input so that you can get back your audio on speakers. Just go to System Preferences and select sound settings, in output section select Internal Speakers as destination.

Follow the steps below to record screen with audio on Mac with this alternative to QuickTime Player. If you are using a Windows computer, just download the Windows version and the steps are similar.

Step 1. Free download, install and launch this screen recorder on your Mac computer.

Step 3. Then you can set the recording area as per your need, you also need to choose to record your Mac system sound or audio from your microphone.

Tips: For recording area, you can record the full screen by clicking “Full”, or clicking “Custom” to select either “Fixed region” or “Select region/window”.

Note: To customize the recording area, you should open the window you want to capture, then you can select the exact recording area.

Step 4. After all the settings are done, just click the “REC” button to start recording. During recording, you are able to use the edit button to edit the screen. You are also allowed to pause recording by click the Pauses button, and you can preview the recorded video after clicking the Stop button. By clicking the “Save” button, you can export and save the recorded video on your Mac.

It’s also possible to record iPhone or iPad screen with QuickTime Player on Mac. Even though Apple users are able to record iPhone screen on iOS 11 and later with its screen recording function, but some people would not like to have the obvious red bar at the top of the screen when they are recording iPhone/iPad screen. One solution to avoid this is to record the screen on a different device, to keep the iPhone or iPad’s display normal and free of visual clues that this is a recorded video. To record iPhone screen with QuickTime, follow the steps below.

Step 1. Connect your iPhone or iPad with your Mac computer by using a USB cable.

Step 2. Run QuickTime Player on Mac and establish connection between your iPhone and QuickTime.

Step 3. Go to File and select New Movie Recording from the drop-down menu. 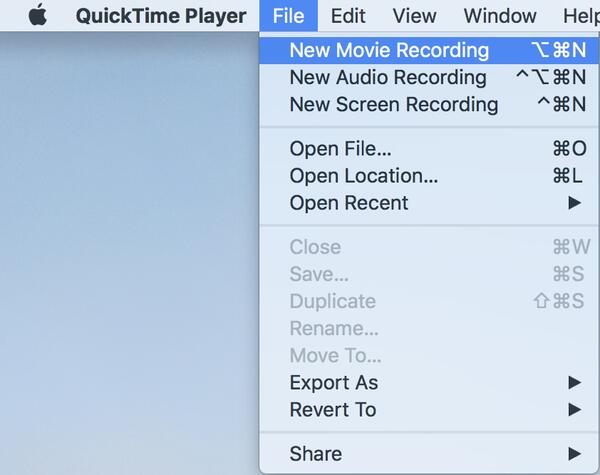 Step 4. Now click the drop-down button besides the red circle icon to select your iPhone as microphone and camera options. 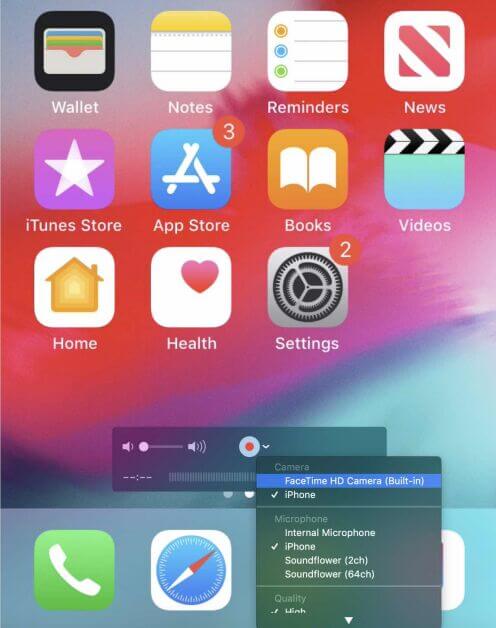 Step 5. After all settings are made well, click the red record button to start recording your iPhone screen.

If you only need to record an easy video on your Mac and don’t mind the complicated process to install an extension in order to record the system audio on your Mac, you can use the free and built-in QuickTime Player as the recording tool. It would also be a good tool to record iPhone or iPad screen. But if you want to record a perfect video with audio without too much operation, Vidmore Screen Recorder should be a better choice.

Vidmore uses cookies to ensure you get the best experience on our website. Learn more Got it