This guide answers the question whether Nintendo Wii can play DVDs. Due to relatively low price, Wii sales have not lost momentum since it released in 2006. However, this game console has always left a bit to be desired for hardcore gamers, such as lack of DVD movie playback.

For some reason, Nintendo decided not to include the DVD playback feature into the Wii, but it does not mean you can watch DVD with your game console. This article shares two ways to do it and you can pick up the right way based on your situation.

As mentioned previously, Wii was designed as a home game console. According to the Wii page of Nintendo, neither the Wii console, nor the new Wii U will play optical discs. Firstly, Nintendo believes that game players already own the devices that have the capacity to play DVDs. The patents related to DVD playback is another reason. Don’t worry! You can still play your favorite DVD movies on your Wii console following the methods below.

Part 2: Play Any DVD on Wii

Wii is a video game console. It means that it can play videos. So, you can rip your DVDs into friendly video format and play DVD movies on your Wii. The biggest benefit of this method is to do what you want on Wii without extra hardware. From this point, we recommend ヴィッドモアDVDモンスター.

In a word, it is the easiest way to play DVD movies on Nintendo Wii or Wii U game console.

How to Play a DVD on Nintendo Wii

When you want to play a DVD on your Wii game console, download the best DVD ripping software and install it on your computer. Then put your DVD into the ROM drive of the computer. Launch the software, hit the DVDをロード メニューと選択 DVDディスクをロードする to your disc to start scanning the optical disc. 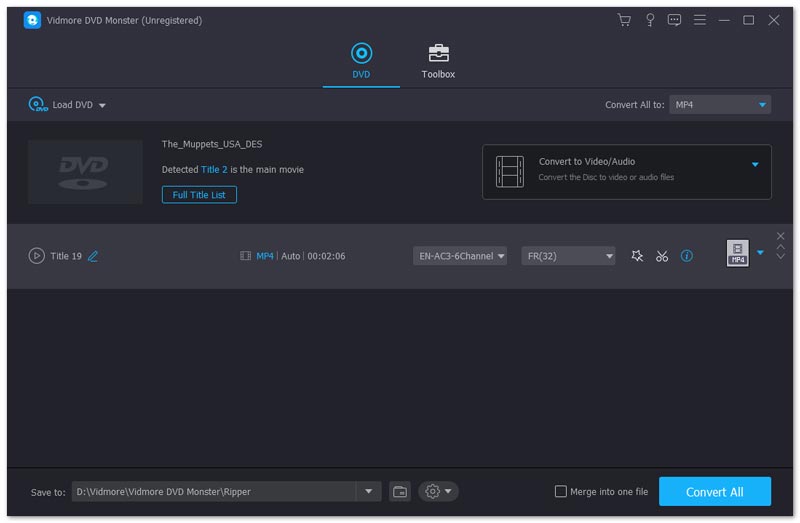 After DVD scanning, select the desired titles or all titles to added them to the media library panel. Then you can preview them with the built-in media player. Pick up your favorite audio and subtitle tracks from the オーディオトラック そして 字幕 bars.

In order to load the movie quickly on Wii, you’d better split it into clips. Click the 切る icon under the movie to open the Cut window, and then reset the 開始 そして 終わり points to shorten it. Click 保存する それを確認するためのボタン。

If you want to edit a DVD movie, click the 編集する icon next to the Cut icon to open the Video Editor window. Here you can rotate, clip and watermark the video, adjust contrast, saturation, brightness and more, change audio and subtitle tracks.

When video editing is done, go back to the main interface, expand the すべてをリッピング drop-down list. Head to the <spanDevice tab, scroll down to select ゲーム from the left side and choose Wii. Then the best DVD ripping software will set the parameters automatically. Hit the 設定 button at the bottom labelled a gear icon to open the 好み dialog. Set the Output Folder field to store the video output. Finally, click the すべてリッピング button at the bottom right corner to start ripping DVD for playing on Wii. 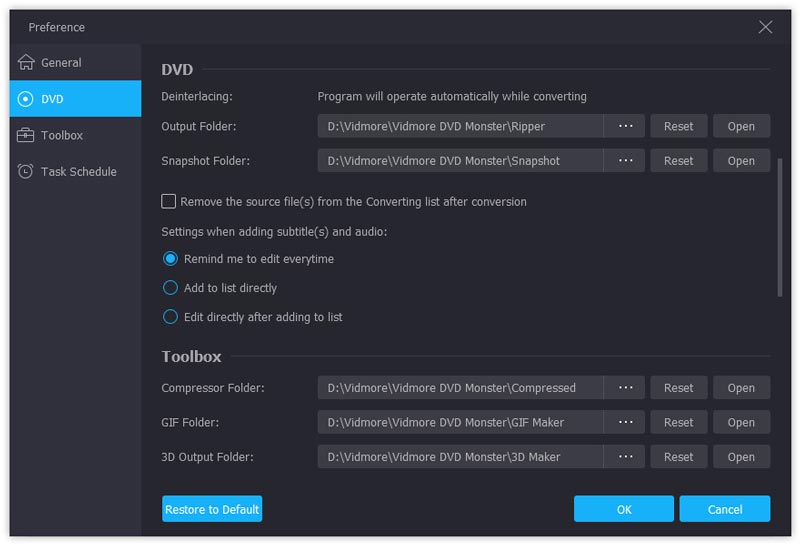 注意： When the process finishes, transfer the DVD videos to Wii with a SD card. If you want to play DVD movies on Wii U, you can stream the videos from your computer directly.

Another way to play DVD on Wii is to build a DVD compatible environment with Homebrew channel, which was released by Team Twiizers.

This method is a bit complicated, so we share a step-by-step guide below.

How to Play DVD on Wii with Homebrew

Firstly, connect the SD card to your computer, copy and paste the private directory of the Twilight Hack from your hard drive to the card. Move the Homebrew Channel named boot.dol to the SD card too.

Then disconnect the SD card from your computer and insert it to your Wii. Delete the Zelda file from Wii File Manager if you have the game on your console.

Next, insert Zelda game disk into Wii, start the game, and Twilight Hack will save it. Start the game and walk backward until the Homebrew Channel starts installing. Now all you need to do is to wait for the installation to complete. 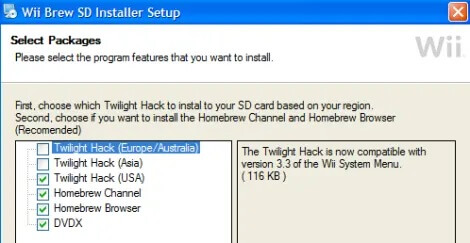 Pull out your SD card from Wii and insert it to your computer. Delete the files copied in the first step, and create a folder titled apps. Move the DVDX and DVD player directories, such as MPlayer, into the apps folder.

Next, insert the card into your Wii. Turn on your console and start the Homebrew Channel. Run DDX installer in the apps folder on SD card and wait for it to finish.

Put a video DVD into your Wii, go back to the Homebrew Channel, and start the DVD player. For MPlayer, press DVD-Video from the menu, select a title and hit DVDを再生 to start. Now, you can control the DVD playback on Wii with MPlayer Wii menu.

注意： This way does not require you to rip DVD into digital videos since Homebrew Channel can turn your game console into a DVD player. However, there are some risks and limitations. First of all, only a few DVD players can work on Wii and they usually have some bugs. According to our test, DVD menus miss when playing on Wii and not all movies on optical discs can be played. Moreover, if anything goes wrong, your disc or Wii console may be damaged.

Nintendo Wii is still one of the most popular game consoles on market. However, the absence of DVD playback feature is the biggest downside. Based on our sharing above, you should get two ways to play DVD on Wii. We suggest you to rip DVD with Vidmore DVD Monster. It allows you to play any DVD movies with your game console. If you encounter any problems when watching DVDs in Wii, leave a message in the comment area below this article and we will reply it as soon as possible.