Voice Memos is a pre-installed voice recorder app for iPad, iPhone and Mac users. You can use Voice Memos to record voice notes, lectures, interviews and more by its built-in/external microphone or headset. It is easy to record voice memos on iPhone, iPad, iPod touch or Mac. Just press the Record button to start and stop recording voice. However, there are only basic voice recording features. If you want to get advanced voice recorder for iOS devices, you can check this article to find the answer. 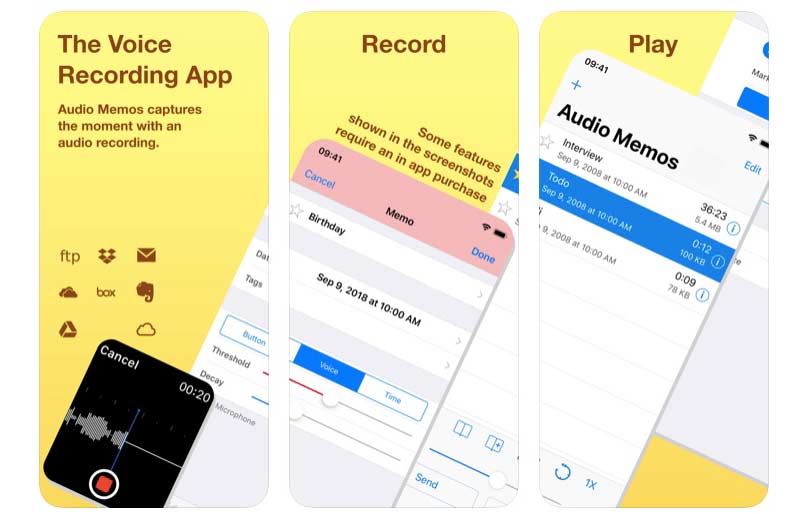 RecUp requires $1.99 before accessing the voice recorder for iPhone and iPad app. You can record instant memos and upload to Dropbox in one stop. Its user interface is quite simple. You can double or single tap the Record button to control the voice recording process. 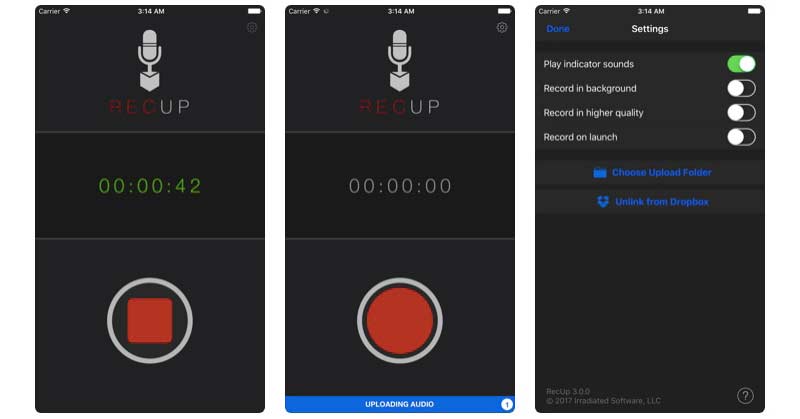 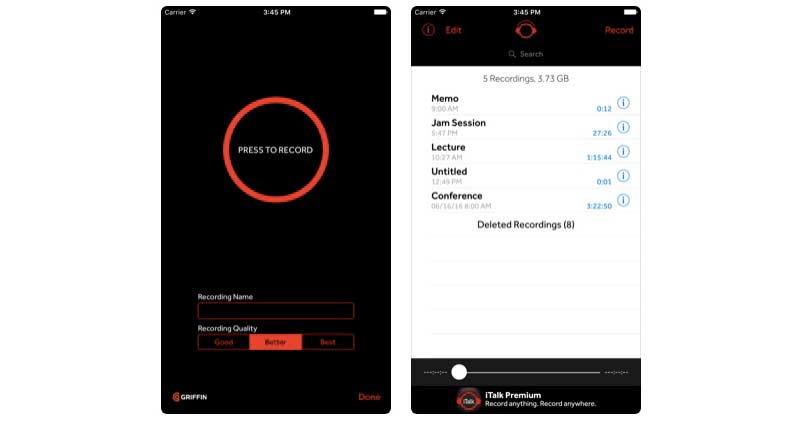 If you want to get the full version, you need to pay $9.99 first. Later, you can quickly build a groove by touching the 16-step sequencer with any part of the audio clip. Moreover, you can get many other advanced sound engine and sequencer capabilities.

You can record your voice within the iPad voice recorder app as long as you want. Just make sure there is enough storage space on your phone. If you unlock the transcribe recording feature, you can use the speech-to-text technology to convert voice into text with ease. 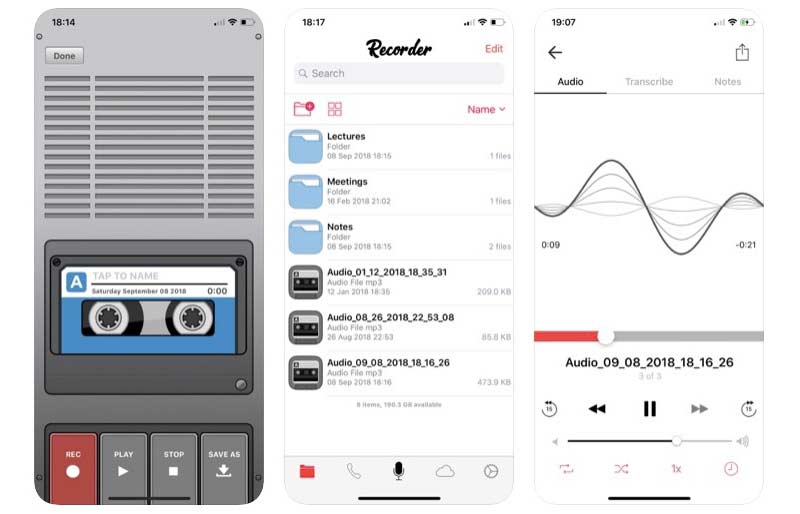 It is a voice note taking app for users to take meeting notes on iPhone and iPad. Your voice recording is searchable and shareable. Thus, it is easy to share meetings with colleagues. 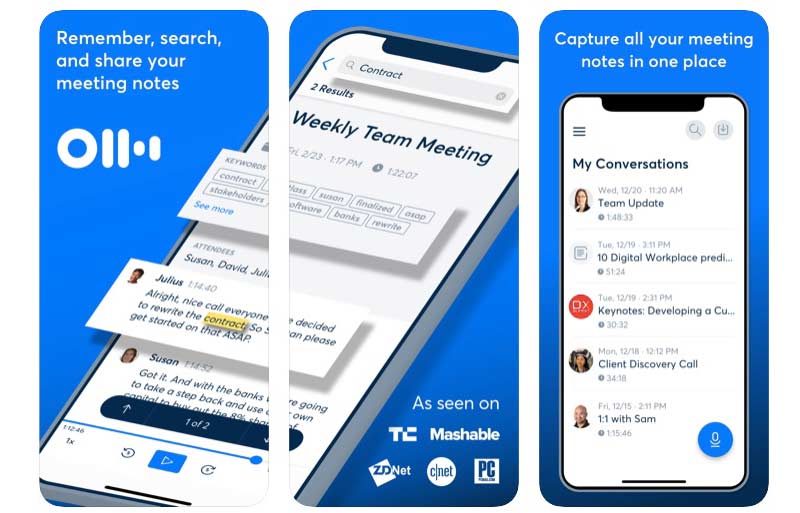 The audio voice recorder app allows users to dictate notes, memos, meetings and many other kinds of sound. In addition, you can overwrite the last dictated portion of the voice recording by using Dictaphone. 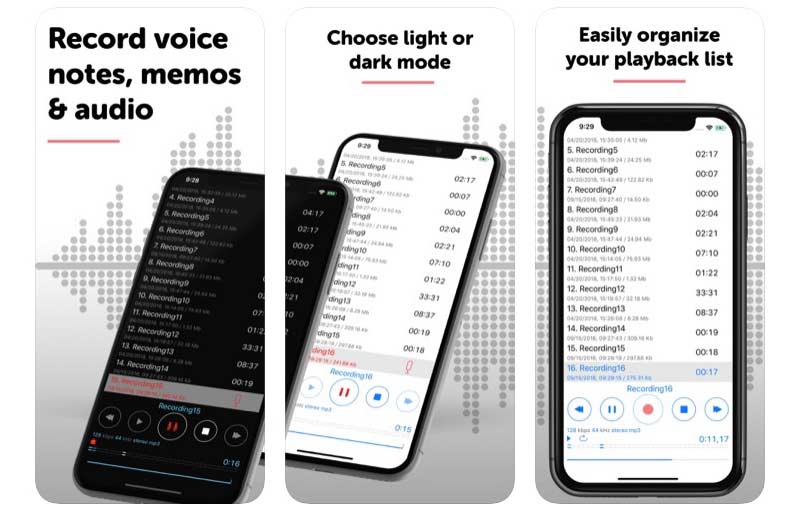 These are popular voice recorders to record voice on iPhone and iPad. If you also want to record streaming video and audio on your computer, you can take a look at Vidmore Screen Recorder. It is a beginner-friendly screen recorder for Windows and Mac users. You can screen record with your voice and system sound at the same time. The larger display screen, larger storage space and hardware acceleration are also good to use.

Hinweis: If you want to record streaming audio or your voice through your Windows or Mac computer, Vidmore Kostenloser Online-Audiorecorder is also a good choice. You can record voice from system and microphone as MP3 format for free online.

Can you record voice at distance?

If you use an iPad to record voice, the distance between speaker and iPad should be close. Otherwise, the voice recording quality is not good. But what if you need to record audio with better quality? During this time, you can buy a digital voice recorder to get better sound quality.

How to record voice on keynote on your iPad?

Open Keynote and choose +. Wählen Sie das Medien icon, and then select Ton aufnehmen. Tap Mikrofon to start recording iPad voice. When you want to stop recording voice on iPad, you can tap that icon again. Later, you can preview, edit and save the recording file.

How to turn voice recording as a ringtone?

Firstly, save your voice recording in .m4a or .m4r format. Then connect your iPhone or iPad into the computer. You can drag and drop the audio from iTunes Tones to iPhone category directly.

These are popular voice recorder apps for iPhone and iPad. You can use your iOS device as a recorder with low cost. Just install the voice and audio recorder you like. Later, you can record sound and save as MP3, M4A and other formats with ease.