Get to Know How Windows Media Player Speeds Up Its Video

How to speed up video clips in Windows Media Player? When using Windows Media Player, this concern crosses the minds of a significant number of individuals. The reason is that the application has an option to conceal sure of its elements on the screen when you play it. Because of this, if you are not very knowledgeable about technology, you will be unable to locate this option inside Windows Media Player. However, there is nothing to be concerned about since this article will provide you with a step-by-step guide on modifying the playing speed in Windows Media Player. Continue reading, and you'll see that there are just three easy actions involved.

The Microsoft Windows Media Player is a media player that is fully functional and comes preloaded with all versions of Windows. This player can play all sorts of files and is fully functioning. This program allows users to explore photos, play music from a CD or a music file, and view video media. Users may also play music from a music file. The Windows Media Player is capable of reading and playing back almost all of the many types of media files that you may find on computers. It cannot only play audio and video clips, but it also has a capability that allows the user to modify the speed at which the files are played repeatedly. It suggests that the only way to acquire the effect you want in Windows Media Play is to speed up the video rather than apply it directly. Since this is the only method to get the intended result, familiarize yourself with the intricacies of how to speed up the playing of films and DVDs with the software, which we will discuss in more detail below.

Step 1: Obtain Windows Media Player on your Windows device, and choose the Video tab from the list of options on the left side of the window. It will go through all of the video files you have saved on your computer and locate each one. You will first see a list of videos in the main user interface. From this list, you may choose the film you wish to view.

Step 2: You may open the movie by right-clicking on it, or you can click the Play button at the lower center of the user interface. Additionally, it allows you to speed up numerous videos simultaneously in Windows Media Player by using a playlist.

Step 3: Right-click the video you want to enhance, then choose the Enhancements option from the menu that appears when you go to the playing window. 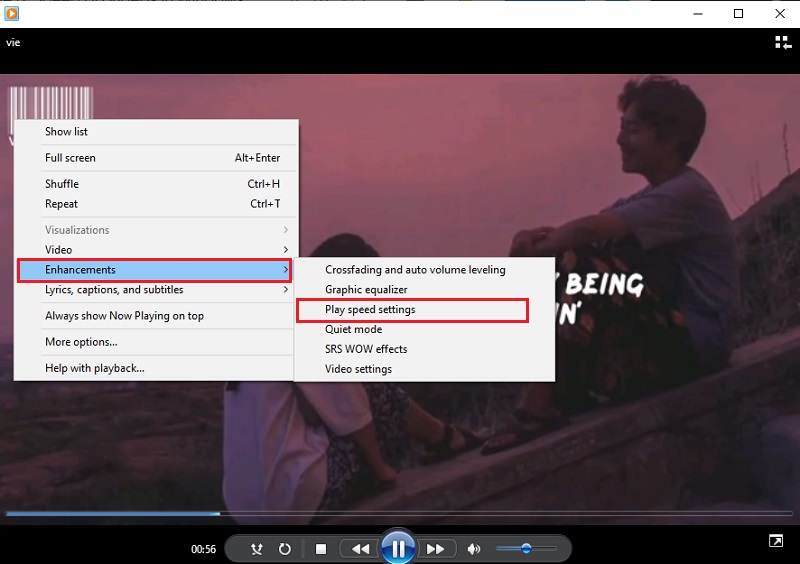 To change the pace at which the movie is played back, choose the Play speed settings option. Move the slider bar to the right to quicken the movie's pace in Windows Media Player. In addition, it offers several settings, such as Slow, Normal, and Fast, each of which increases 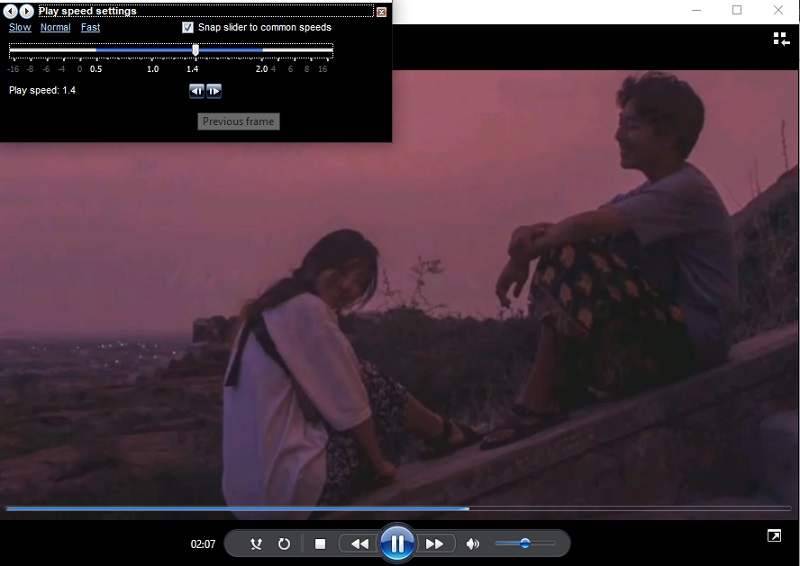 Part 2. How to Change the Speed of Videos Permanently

Vidmore Video Converter is a complete video speed regulator that you should use when you need to speed up movies. You can do it by applying a speed-up effect rather than playing the films again at high speed. It offers speed rates ranging from 0.25% to 8% of the original speed. Altering the video and audio settings permanently in Windows Media Player is a different option than speeding up videos in that program. Because of this, this program will significantly assist you if you want to play your video at a different pace without having to set it up again from scratch.

You also can alter the frame rate of the video without causing any disruptions to its regularity or quality. Before you export the films, you may also use this video speed controller to change the format of the videos, edit them, cut them, or trim them. All of these editing and trimming options are available before you export the videos. It will provide you with a manual that will assist you in figuring out how to make use of it.

Step 1: When you've downloaded Vidmore Video Converter to your Mac or PC, you may install it and start using it immediately. The next phase entails allowing the software to function correctly.

If you want to access the Toolbox, choose it from the main menu. When you're ready to slow down your movies, choose the Video Speed Controller and hit the + button. 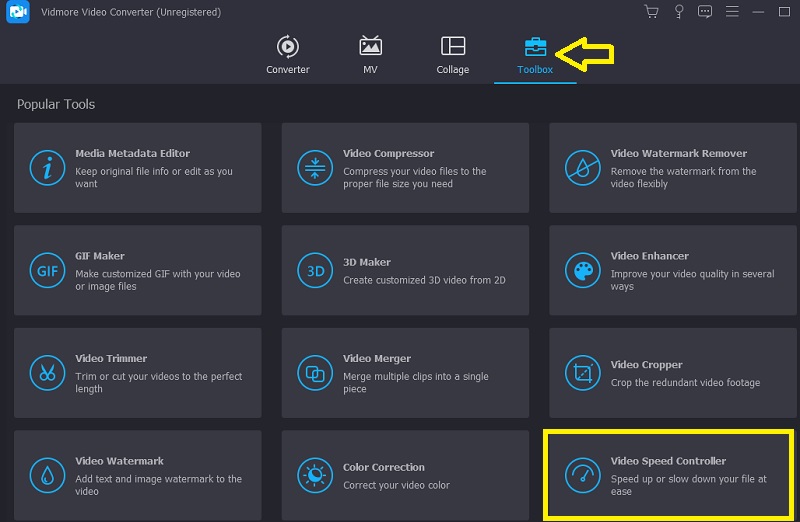 Step 2: After that, you'll be able to choose the speed you want to go. A live demonstration of the effect in question will be shown on the primary screen just before you are given a choice to export it. You can adjust them at any moment to the speed rate to ensure that it satisfies your needs. 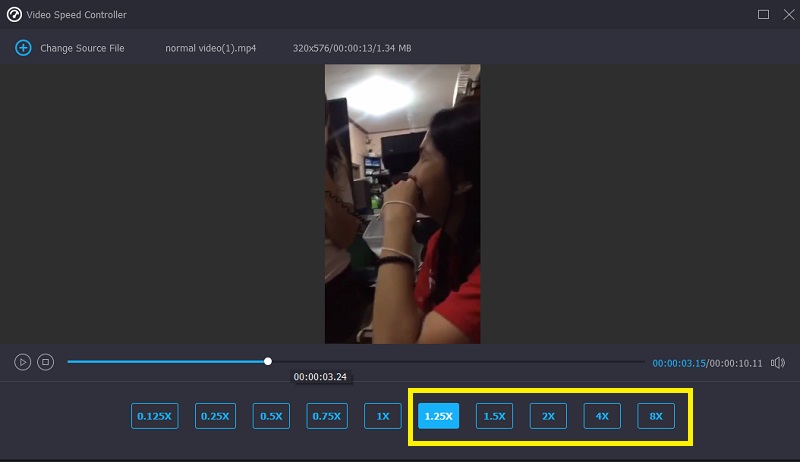 Step 3: After completing the creation of the movies, you will be prompted to choose the output options you want to use for the videos. After that, choose the directory you wish to use as a storage location. After you have made your choice, you may then click the OK symbol to save the changes to the preferences. 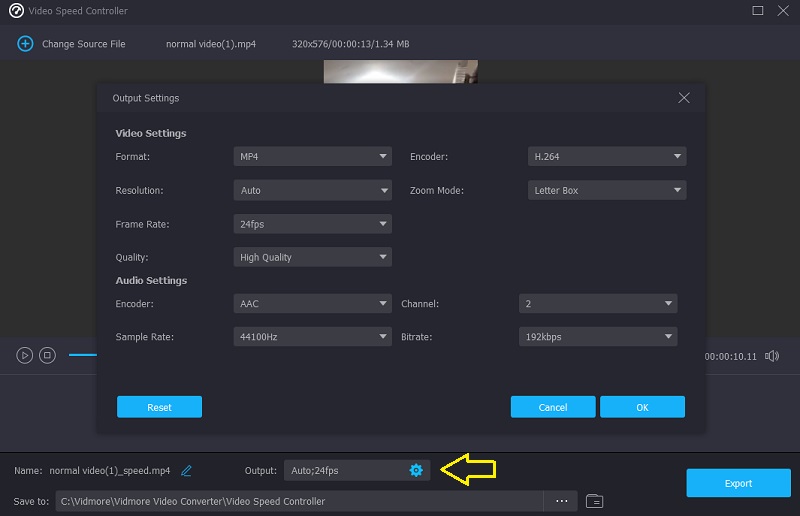 Select the video you want to retain, and then choose the Export option from the drop-down menu. 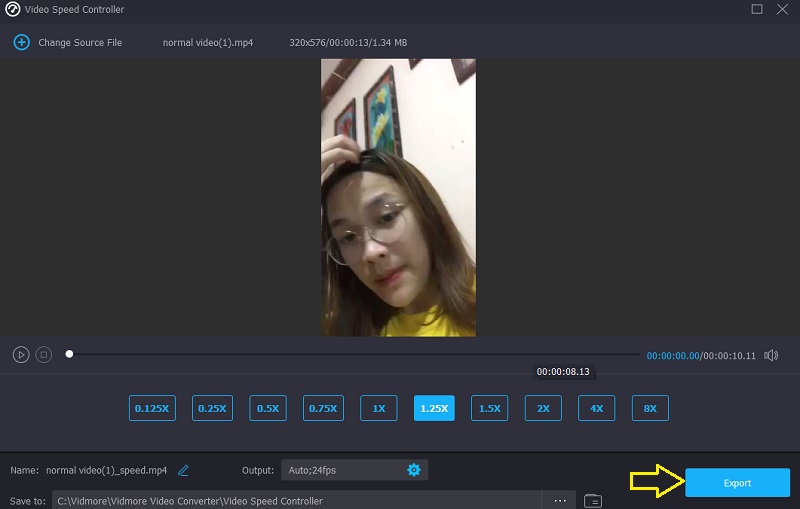 Part 3. FAQs About Speeding Up a Video in Windows Media Player

How do I fix Windows Media Player to change the speed of playback?

Launch the control panel, choose the View By drop-down menu, and select the Large Icons option to view all available capabilities. To enter the Windows Media Player Library, choose View all from the Troubleshooting menu after clicking the option that says Troubleshoot. After that, pick the option to Apply this Fix to make films in WMP run more quickly.

Which Mac media player allows you to adjust the speed at which a video plays?

The QuickTime Player is the best option if you need a media player for your Mac that allows you to enhance the playback speed.

Windows Media Player was developed to work only on Windows operating system devices. It is possible to trim or alter a section of a media file straight inside the Windows Media Player. It does not come with any additional editing tools other than that.

Windows Media Player can speed up video and audio clips only if you know how to operate the hidden setting. And that brings us to the primary objective of this piece, which is to instruct you on how to modify the playback speed of videos in Windows Media Player. Vidmore Video Converter is an essential piece of software, though, if you're looking for an easier-to-use editing tool.