Ultimate Guide to Turn on AirPlay on Mac

AirPlay has been developed to easily transmit videos, audios, photos, documents, and other files among Apple devices. It offers a simple and effective way to share contents from iPhone iPad iPod and Mac to Apple TV, speakers, and AirPlay 2-compatible smart TVs.

When you turn on AirPlay on Mac, you can broadcast the screen of your Mac to Apple TV or smart TV in real-time. However, many users faced the issue of AirPlay not showing up on Mac or no AirPlay icon on Mac issue. Are you one of them?

Do you know how to turn on AirPlay on Mac? In fact, many Apple users are still not familiar with AirPlay and its capability. Here in this post, we will tell you more information about the Apple AirPlay and right way to enables AirPlay feature and use it.

Part 1. How to Turn on AirPlay on Mac

Apple AirPlay allows you to stream video and mirror your display from Mac and iOS device to Apple TV with ease. To turn on and use AirPlay on Mac, you should make sure both your Mac and Apple TV are on the same Wi-Fi network.

When your Apple devices are under the same Wi-Fi network, AirPlay will simply connect and start the streaming. AirPlay will use a point-to-point Wi-Fi to stream if your devices are not on the same network connection.

An AirPlay icon will appear at the top of the screen in your Apple menu bar when a compatible AirPlay-enabled device is within the vicinity of your Mac. Just simply tap the AirPlay button and select a target device, you can easily AirPlay video from your Mac.

Step 1. To mirror your Mac display to Apple TV or AirPlay 2-compatible smart TV, you should first find the content you want to stream on Mac.

Step 2. If the AirPlay icon is missing on Mac when an Apple TV is around, you can go to System Preferences → Displays → Display and choose the Show mirroring options in the menu bar when available. 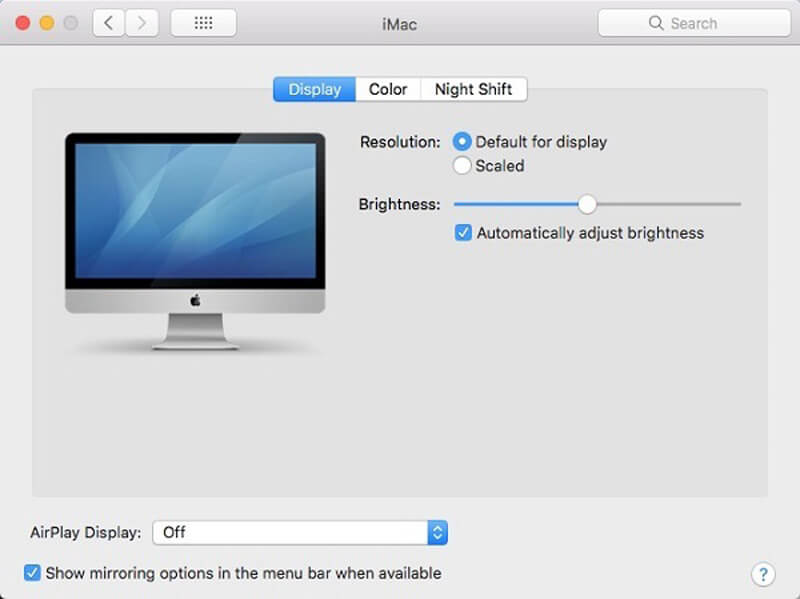 Step 3. Click the AirPlay button to turn on AirPlay on Mac. Then click in the video playback controls.

Step 4. Now you can select the target Apple TV or smart TV and start the AirPlay streaming. When you want to stop the Mac content streaming, you can click the in the video playback controls again and then choose Turn Off AirPlay.

When you turn on AirPlay on Mac, you can see the icon appears blue when the feature is active. You should know that, on your MacBook Air, MacBook Pro, iMac, the Airplay icon only shows in the menu bar when the AirPlay mirroring is available.

For mirroring iPhone to PC, AirPlay is not enabled. You should refer to this post.

Get the details here to record screen on Mac.

Part 2. Why AirPlay Not Showing Up on Mac

AirPlay not working issue is mainly caused by the Apple devices connected to different Wi-Fi networks.

Sometimes, when you are using an out-of-date firmware, you may also face the no AirPlay icon on Mac situation. So, you should update your Mac or iOS device to its latest version.

If you are on a bad network connection, when streaming media content from one device to another, you may easily get the AirPlay not working issue. In some cases, the bad network can’t afford streaming files to another device.

Part 3. FAQs of How to Turn On AirPlay on Mac

Question 1. How to use AirPlay?

Question 2. How to use AirPlay on a smart TV?

Question 3. How to reset AirPlay on Apple device?

When you want to reset the AirPlay feature, you can restart your Apple device and reboot your Wi-Fi router. By doing so, you can do a complete resetting of AirPlay.

Question 4. How does AirPlay work?

Apple AirPort Express can easily detect and connect all of your Apple devices if you are using it as your wireless router. At the same time, all the compatible devices will recognize each other when they are under the same Wi-Fi network. AirPlay will detect all these devices and make the connection with ease.

Hope you can learn more information about AirPlay after reading this page. You can get a detailed guide to turn on AirPlay on Mac. Also, you will know some reasons why AirPlay not showing up on Mac. You can leave us a message if you still have any questions about the Apple AirPlay.