If you can’t explain something with pure words and pictures, you can record video and audio to express more effectively. Instead of reading an article with thousands of words, people prefer to watch a how-to guide video less than 10 minutes. In most cases, problems can be solved perfectly. So it is recommended to screen record on Mac for tutorials or other cases. Sometimes you can record video or audio playing on your Mac for offline playback, backup or reference.

It is a great help if you can draw on screen while recording. There is no need to edit the recording video file to add drawing tools again. For people who want to screen record on Mac for education, how-to video and other tutorials, Vidmore Screen Recorder can be a good choice. You can add real-time drawing tools and mouse effects when you are recording screen video on Mac.

Furthermore, you can add a webcam overlay on your screen recording. For instance, you can record both the video and your face and voice over in the same video. The Mac screen recorder software will not crash or freeze. If you are not satisfied with the certain part, you can trim recording file to extract the video clip you like directly. In a word, it is your first choice to record screen video and audio on Mac in one stop.

Step 2: Trigger on Display. Select the region or window you want to record. Then enable System Sound or Microphone to set the input audio source.

Step 3: If you want to change the video recording settings, you can click Settings to enter into the Preferences window. Here you can change the output video format, quality, hotkey and more details. 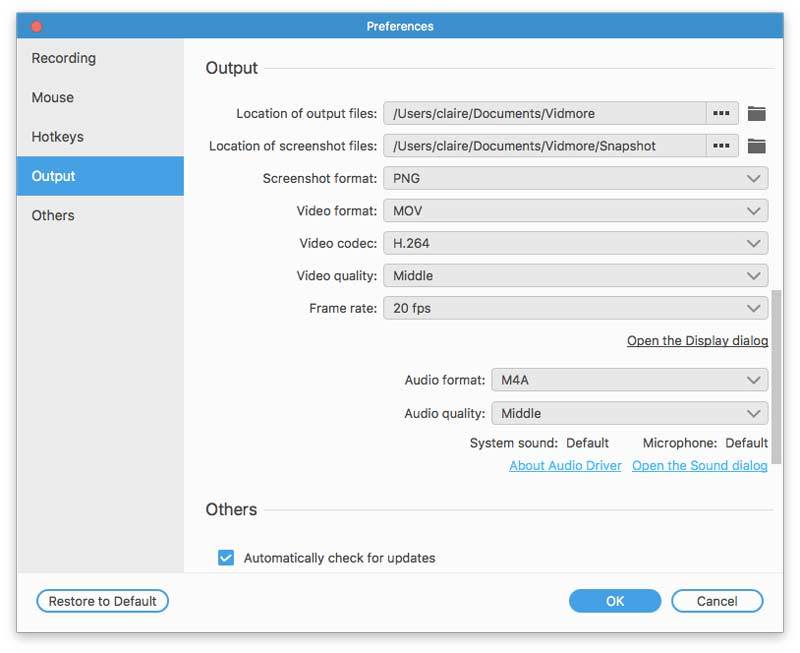 Step 4: Click REC to start recording. You can click the Screenshot or Edit icon on the right side. So you can draw on the recording file or take a screenshot.

Step 5: When the screen recording process ends, you will be in the Preview window. You can set the start and end time to trim this recording file. Later, click Save to head to the Recording History window. You can share, delete, play, rename and organize it here.

Part 2: How to Screen Record on Mac with QuickTime Player

Step 2: There will be a small window pops up. Unfold the down-arrow list. Select Internal Microphone to record screen and audio at the same time on Mac.

Step 4: Once the QuickTime recording finishes, choose Save from the File list to export.

Part 3: How to Screen Record on Mac with macOS Mojave Hotkeys

If you are running macOS Mojave, you can get one more choice for Mac screen recording. By pressing Shift, Command and 5 keys, you can record any screen area on your Mac computer. It is extremely simple and easy to use. The main disadvantage is that you cannot get any editing or output preferences.

Step 1: Press Shift, Command and 5 keys simultaneously on the keyboard.

Step 2: In the onscreen controls, you can select whether to record on Mac with entire screen or the selected portion.

Step 4: You can click Stop Recording in the menu bar to stop recording on Mac screen.

Step 5: The recording video will be saved in desktop as the MOV format by default. You can play, convert and edit it with other programs.

Is there a time limit on screen recording?

No. You can screen record on QuickTime, Mojave hotkeys and Vidmore Screen Recorder as long as possible. But you can set a timer to screen record on Mac smartly. When it reaches the time you set before, the Mac screen recorder will stop recording and export it automatically.

How do I stop my screen recording from lagging?

Close other programs that run in the background. Your computer will be slowed down because of opening too many programs at the same time. If you screen record on gameplay or other live streams on Mac, it is recommended to use Vidmore Screen Recorder. Because you can fully control the entire recording process without choppy or lag.

Will someone be notified if I screen record a Facetime call?

No. Just make sure there is no notification in your Mac screen recorder. In most cases, you can screen record Facetime without them knowing. Even though Facetime calls are private, anyone can record screen video and audio of Facetime and other online calls secretly.