How to Capture World of Warcraft in HD Quality

World of Warcraft is a worldwide multiplayer online role-playing game. While playing WoW, there are some wonderful records you can’t miss. But how to record the gameplay and share it with friends? Don’t worry. Here, we will share you 2 World of Warcraft game players to record WoW without time limitation for playback on Windows, Mac, iPhone and Android.

There are some exciting gameplays you don’t want to miss when playing World of Warcraft. With a game recorder, it seems easier to capture WoW gameplay clips and share them on social media platforms. Vidmore Screen Recorder is a professional game recorder designed for pro gamers and amateur players. With it, you can record exciting moments when playing World of Warcraft.

How to record WoW gameplay with Vidmore Screen Recorder

Step 1. Free download, install and run this game recorder on your Windows computer or Mac. Choose Video Recorder in the main interface.

Step 4. After all settings done, click REC button to start recording World of Warcraft gameplay. During the recording, you can add a rectangle, arrow, ellipse, line, caption and callout.

Step 5. Click the Stop button to finish Warcraft gameplay. If it is okay, choose Save button to save the World of Warcraft video on your computer.

Part 2. How to Capture WoW Gameplay with Bandicam

Bandicam is one of the most advanced screen recording utility for screen, game and webcam capture. You can capture 4K Ultra HD WoW, Minecraft, Skype call, iTunes, Webcam without lagging. It allows you to record World of Warcraft video at resolutions up to 3840x2160 in high quality. Check the detailed steps to record WoW gameplay with Bandicam. 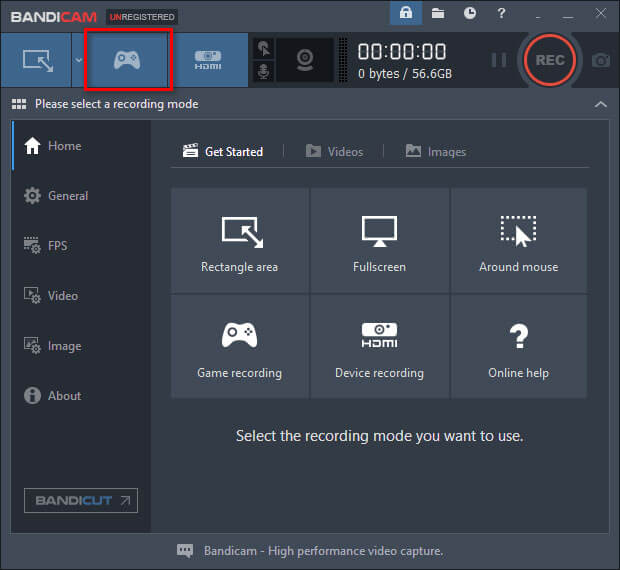 Step 1. After downloading Bandicam from its official website, install and run it on your computer. Choose Game Recording mode to perform a high quality WoW game recording.

Step 2. Run World of Warcraft game on your computer. You can control FPS (Frames per second) under FPS tab of Bandicam.

Step 3. Click F12 keyword to start recording World of Warcraft. Then the green number (FPS) on the top left corner of the interface will be red.

Note: If you didn’t register Bandicam, the watermark www.BANDICAM.com will be applied on the recorded World of Warcraft gameplay video.

1. Is World of WarCraft free?

World of Warcraft (WoW) is not fully free to play. Users can try World Warcraft Free with the Starter Edition, but it only allows users to play free up to level 20. For more levels, you need to pay and purchase a subscription.

2. Can you play WoW without subscription?

Yes. If you want to experience WoW for a moment, you can play it without subscription. Though it allows users to play up to level 20, but the gold is capped at 10g, which is far enough than the appropriate gold spent to level 20.

3. What game engine does WoW use?

We mainly introduced 2 World of Warcraft game recorders to capture WoW games in high quality. If you are particular about watermark applied with Bandicam free trial version, you should try Vidmore Screen Recorder to capture 2D/3D gameplay without watermark. If you have any questions, please leave your comment below.