The Microsoft Xbox One game console does have HDMI 2.0 which can output a 4K signal. So Xbox One is able to play 4K Blu-ray. It doesn’t matter which Xbox One model you are using, Xbox One S or Xbox One X, you can play Ultra HD Blu-ray disc with it. But you should know that, Xbox One only supports 4K Ultra HD Blu-ray. You can’t use it to read regular Blu-ray discs.

Thing will be quite different if you are using an Xbox 360 console. By default, Xbox 360 relies on DVDs for its games and doesn’t support Blu-ray discs. It allows you to stream 1080p HD videos on video apps. But it is completely incompatible with Blu-ray.

However, many users complain that they can’t play a Blu-ray disc on Xbox One. Are you one of them? Is it possible to watch a Blu-ray movie with Xbox 360? Here in this post, we will explain the reasons why you can’t play Blu-ray discs using Xbox One. In addition, we will show you how to set up your Xbox console for the Blu-ray playing. You can also learn an effective way to play any Blu-ray discs on Xbox, even Xbox 360.

Part 1. Why You Can’t Play Blu-ray on Xbox One

Similar to Sony Play Station 4 Pro and Nintendo Switch, Xbox One is one of most popular and powerful gaming consoles which can give you fantastic gameplay experience. Microsoft Xbox One is 40% more power than any other console and 6 teraflops of graphical processing power for an immersive true 4K gaming experience. It supports 4K Ultra HD Blu-ray and HDR. So as it mentioned above, Xbox One is able to play Blu-ray disc. Besides the Blu-ray, it also enables you to play DVD discs.

Xbox One console is manufactured for a specific Blu-ray region, following international standards. It is not compatible with all Blu-ray discs and only the Blu-ray discs sold in the same region as the console. In addition, you can’t use it to play regular Blu-ray and 3D Blu-ray discs. For now, there is no 3D Blu-ray compatibility on Xbox consoles. So when you insert that kind of Blu-ray disc, the Xbox device can’t read it.

In fact, you are not allowed to directly play a Blu-ray disc even for a standard 4K Blu-ray. Because Xbox consoles do not come with native disc playback support. Due to the global decline of physical media sales, Microsoft removed the Blu-ray and DVD playback support several years back. So when you have the need to watch a Blu-ray movie with Xbox One, you should do some operations first.

Part 2. How to Set up Xbox One to Play Blu-ray Disc

As it mentioned above, you should first install the Blu-ray Player app. Actually, after you insert a Blu-ray disc into your Xbox One, there will be a pop-up window to guide you install this Blu-ray playing app. Here you can follow the instructions to do it.

If there is no prompting window, you can go to Store from Xbox Home to find this player. Click Apps from the Categories section and then rely on search feature to locate and install the app. 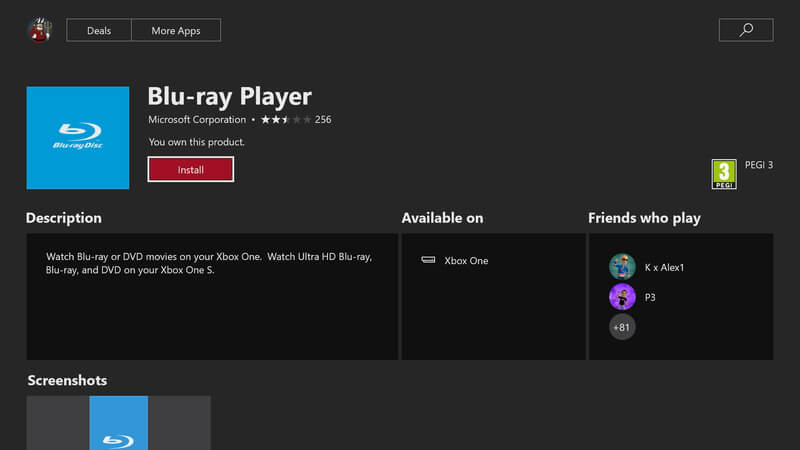 When you get Blu-ray Player app installed on your Xbox, you can handily play the Blu-ray movie with fantastic visual experience. Video game discs for the Xbox One console are not coded to regions. But not all Blu-ray or DVD discs are coded to all regions. Xbox One can only support region-free discs.

Actually, you can choose to rip the Blu-ray disc to digital file like MP4, MOV, AVI, or FLV for better playback on your Xbox console, media player or portable device. Here we strongly recommend the powerful Blu-ray Ripper to help you copy movie from your Blu-ray disc and save it in popular video format.

Step 1. First, you need to download and install this Blu-ray to Xbox One/360 converting software on your computer. You can double click the download button above and then follow the instructions to free install and run this Blu-ray disc ripper with ease.

Insert your Blu-ray disc into the disc driver. If your computer is not equipped with a disc drive, here you need to connect an external one. After you add the Blu-ray disc, the Blu-ray Ripper will automatically detect and analyze it.

Step 2. As an all-featured Blu-ray ripping and editing tool, it provides you with many useful features. When you enter the main window, you should choose the Ripper feature for the Blu-ray disc ripping.

Click the big + icon to analyze and load movies on your Blu-ray disc. Here you can also click the Load Blu-ray to add the Blu-ray movies to this software.

Step 3. This Blu-ray Ripper enables you to convert Blu-ray to any frequently-used video format like MP4, MOV, AVI, MKV, FLV, and more. During this step, you can click Rip All to to select a suitable output format for the ripped Blu-ray movie.

Step 4. After that, you need to choose a right hard drive for the output Blu-ray movie. You should know that, high quality Blu-ray movie always has a large file size. So you should pick a hard drive which still has enough storage space. Then click Rip All button to start ripping your Blu-ray disc.

Within just a few clicks, you can handily rip your Blu-ray disc to digital file for better playback on Xbox, or other devices. This powerful Blu-ray Ripper has the capability to convert Blu-ray to 4K video. That means, there won’t be any image or sound quality loss during the Blu-ray disc ripping process. It also provides many editing functions for you to edit the Blu-ray movie, adjust video effects, and enhance video quality.

What’s more, this Blu-ray Ripper is designed with the latest accelerate technology. So you can get a really fast Blu-ray ripping speed. After that, you can easily play any Blu-ray movies on your Xbox One, Xbox 360, computer and other devices.

Does Xbox One play Blu-ray? After reading this post, you can get a real answer about this question. At first, we tell you the reasons why your Xbox One or Xbox 360 can’t play Blu-ray disc. Then you can learn detailed steps to play Blu-ray movies with Microsoft Xbox One.

If you are an Xbox 360 user, you are told that you can’t play Blu-ray disc on your device. But here in this post, we shared a simple Blu-ray Ripper to help you convert Blu-ray movie to digital video. After making a digital copy of your Blu-ray, you can easily enjoy it on any device as you like.