After capturing videos with your Canon or Sony digital camera, you may get some MXF files. It’s one kind of common need to combine these MXF videos together while editing. Are you looking for a good program to merge MXF files?

Many video editors offered on the market can help you merge MXF video and audio. In case you don’t know which MXF joiner you should use, this post lists 3 great programs to merge MXF files. You can learn the key features of each video merger and then pick your preferred one.

Part 1. How to Merge MXF Files and Convert to MP4 on Windows/Mac

If you prefer an all-featured video editor which carries various editing features including merge, cut, crop, rotate, and more, you should try the powerful Vidmore Video Converter. It can work as both a video editor and converter to help you deal with different editing and converting works. For example, you can use it to adjust audio tracks and add watermarks to video.

This video joiner tool is able to merge two or more videos in all frequently-used formats like MXF, MOV, MPEG, M4V, AVI, FLV, MP4, and more. With the adoption of the latest accelerated technology, it can combine high-definition videos even up to 4K UHD fluently. Moreover, it enables you to merge MXF files into one and export them as MP4, FLV, or another output format you need.

Step 1. This MXF merger allows you to splice videos together on both Windows 10/8/7 PC and Mac. Choose the right version based on your system and free install it on your computer.

Step 2. Launch Vidmore Video Converter and click Add Files to import your MXF files. You can add two or more video clips based on the editing need. For some large MXF files, you can use the Cut function to remove unwanted parts. 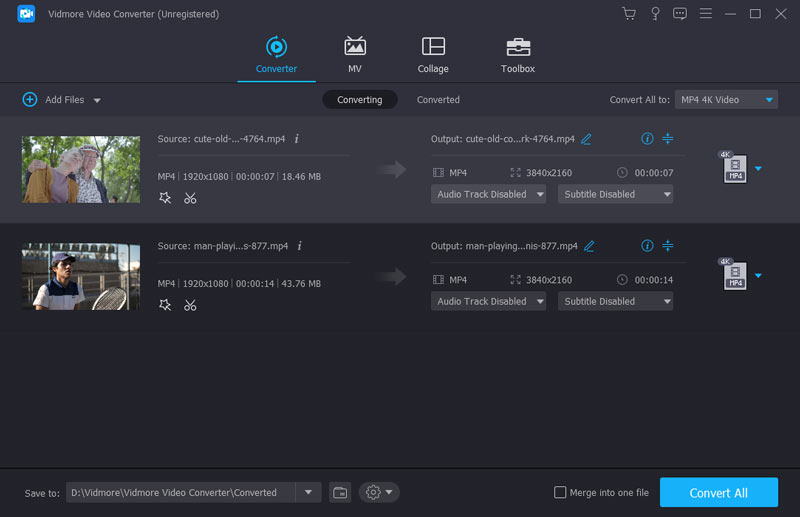 Step 3. All your added MXF files will be merged in the video listing order. So you should adjust the video order by clicking the Move up/down icon or directly dragging the file.

Before merging MXF files, you can also edit them with various editing features. If you want to output the combined video in another format like MP4, you can select it through Convert All to option.

Step 4. To combine all your MXF files together, you should check the box of Merge into one file. After that, you can simply click on the Convert All button to start the MXF merging.

To join MXF files, you can rely on MXF joiner freeware. This part like to introduce you to 2 more video mergers to help you splice several MXF clips.

Free Video Joiner Online is a free online video merging tool that can help you combine two or more MXF files together. It offers a convenient way to directly merge and convert multiple video files into one on any web browser including Google Chrome, IE, Safari, Yahoo, and Firefox. There are no registrations and installations for the MXF merging. 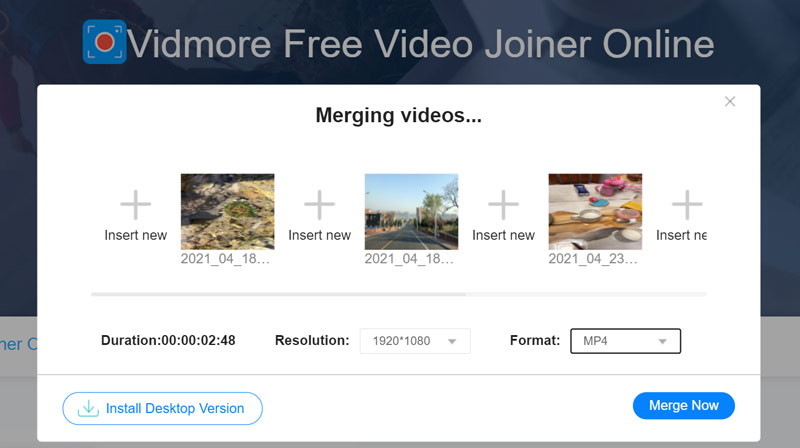 This free online video joiner enables you to choose output resolutions varied from 320*240p to 1920 * 1080p. Apart from MXF, it also supports other popular formats, such as MP4, MOV, MKV, AVI, M4V, FLV, WMV, and VOB, and so on. Compared to other online video combiners, it can export videos in high quality more effectively.

Format Factory is an all-featured video and audio formats converting tool which also carries many editing features including Video Joiner, Crop, Splitter, Fast Clip, Delogo, Screen Record, and more. You can free download it from its official site to merge MXF files. It offers a specific Video Joiner & Mux feature for you to combine several video clips together. 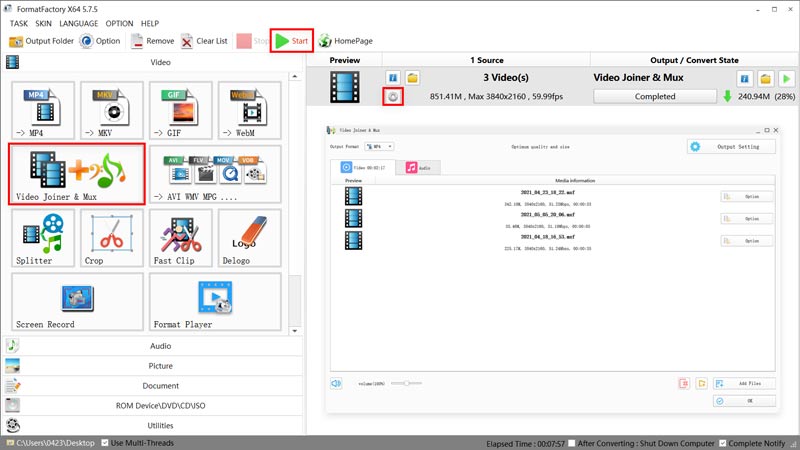 It supports most of the multimedia formats including MP4, MOV, AVI, FLV, WebM, WMV, and MKV. One thing you should know is that it can only export merged videos in such formats. You can’t save it with the original MXF format. Even as a powerful video joiner, it will take a really long time to complete the MXF merging and converting process.

Yes. VLC Media Player is able to play MXF files smoothly on your computer and portable iOS and Android device.

Question 2. How to free convert MXF to MP4?

When you have the need to convert MXF to MP4, you can rely on the popular Free Online Video Converter. It has the capability to make the video conversion without quality loss.

We have listed 3 video joiners that you can use to merge MXF files. All the recommended tools cover many frequently-used video formats for both input and output. When you want to combine videos into one, you can choose your preferred video merger to do that.