WAV or WAVE is a quite common audio file format that is normally seen on Windows PCs. But for those who are not familiar with this file type, it might be a little hard for them to know what WAV is and how to play it on the computer, phone, or other devices.

So, here in this post, you will learn what WAV is and the difference between WAV and MP3, the most popular audio format we use in daily life. Then you will get the best WAV player to play WAV files on your Windows PC, Mac, iPhone, and Android.

Waveform Audio File Format, also known as WAV and WAVE, is a standard audio file format. It is initially released by developed by IBM and Microsoft in August 1991. Normally, it is used for saving audio content on PCs.

Although WAV has the ability to handle compressed audio, most WAV files are uncompressed and lossless, which makes them usually larger than other popular formats like MP3. An MP3 file is compressed, which means it is much easier to share online. That explains why MP3 is a much more popular audio format. So, you can choose either one that suits you best. And you can also convert audio files, for example, from WAV to MP3, according to your need.

As WAV is quite popular now, it is actually not very hard to find an audio or media player that supports WAV format playback. For instance, you can try the default player on your device. But if your computer or phone doesn’t have a functional program for the playback, then you should consider a third-party application.

Part 2. Best WAV Player for Both Mac and Windows

If you want to play WAV on your computer, you will need a powerful audio player that is equipped with advanced audio decoding technology which can bring you a high-quality audio playback experience.

Then you definitely need to try the best media player ever - Vidmore Player. It is the most professional media player software for you to play all kinds of media files, including WAV files, without quality loss effortlessly. Beside popular audio and video files, you can even use it to play Blu-ray or DVD disc/folder/ISO image file without any hassle.

How to Play WAV Files with Vidmore Player

Step 2: After that, please run the player. In the center of the main interface, there are two buttons – Open File and Open Disc. Given that you want to play a WAV file, please click the Open File button here. Then you need to select the audio file you want to play on your desktop or laptop. If you want to, you can even select multiple files at a time. The player will form a playlist for you to play music in the order you like.

Step 3: After selecting, the file will be played immediately. While playing, you can pause, resume, rewind, fast forward, and open the previous/next file. And you can also adjust the audio volume as you need. 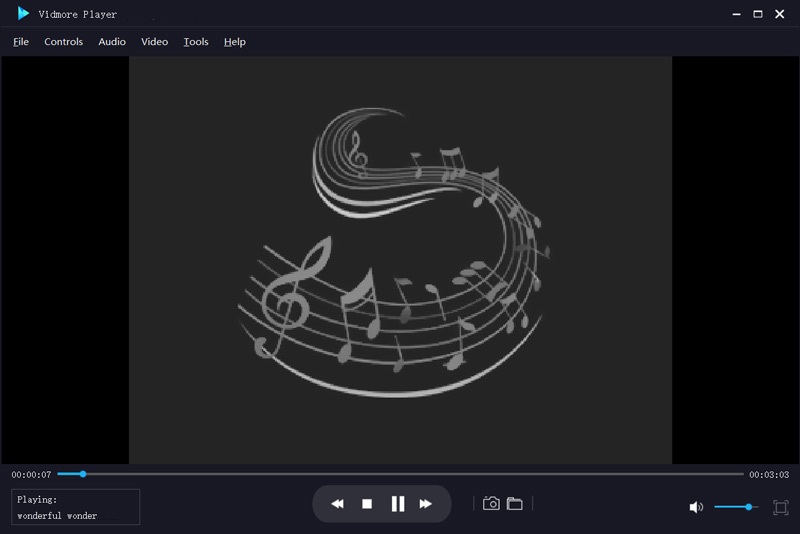 But what if you want to play WAV files on your iPhone or Android phone? Not all the default player on your phone can deal with WAV format. Thus, a portable WAV player app is exactly what you need. So, we will share the top 6 free WAV players for iOS and Android users.

In this post, you have learned the best WAV file player for both Windows and Mac. And you have 6 options of WAP player apps for your iPhone or Android. You can pick anyone you like. If you have other recommendations, please comment below. Or you can feedback us on your user experience with these WAV players.